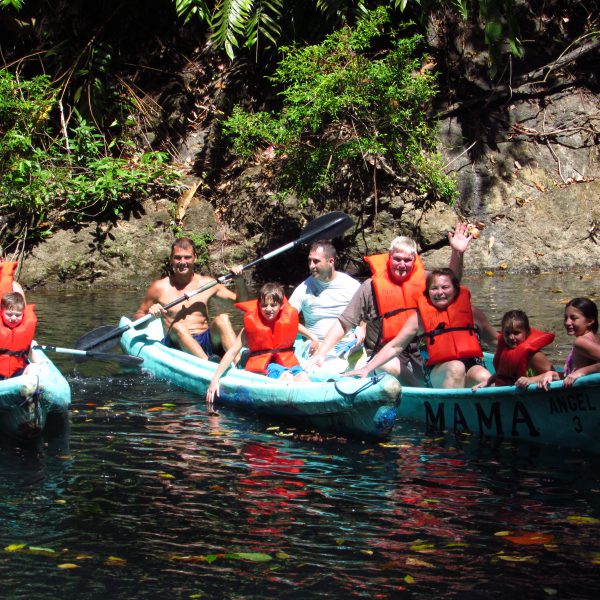 Our private and exclusive kayaking waterfall adventure includes a boat trip to and from Rio Claro, 3 hours of guided kayaking to numerous pristine waterfalls, and a picnic lunch. Departure times can be arranged depending on your needs and both double and single kayaks are available.

You should bring plenty of water, crocs or sandals with socks, dry bags for any electronics, sun protection, swimming costume and a waterproof camera.

Because this is a commission-free trip, there is a flat fee of $240 for one person and the $40 per additional person up to 6 people.

The GringoCurt.com award for best Kayaking adventure in Costa Rica, absolutely goes to the Rio Claro Life for Life Sea Turtle Project. There are lots of great elements to this activity so let’s start with a description of the location.

Rio Claro is approximately a 2 hour brisk walk along the Beach Hike from the Drake Bay village center. At this distance from the already small and nature-filled village of Drake Bay, there are no restaurants nor grocery stores. There is no connection to the local electricity grid. The solar power system at the Life for Life foundation powers a radio used to occasionally listen to soccer matches or music.

At Rio Claro you will be surrounded by primary lowland rainforest and a great opportunity to experience vast amounts of local wild life. From July 15th to December 15th the sea turtle conservation project has been saving thousands of babies each year, since the 1970’s. Rio Claro also has one of Costa Rica’s best surf waves. It’s is not a beginner wave, but for those who enjoy a long strong left, boards are usually available to rent.

All of this and I haven’t even mentioned the word kayak yet. The turtle project leader is named Ricardo (Or Clavito to his friends). He has no bank account and no savings. Any money handed to him is used to save turtles. Most of the funds for the project are earned through kayaking tours.

The tour begins at the river mouth and goes upstream to visit numerous waterfalls, rock jumps and swimming holes. The entire journey is like a step back into a time before humans. Doing the 2 hour tour provides enough time to see some really nice waterfalls but the best waterfalls require 3 hours.

The name “Rio Claro” translates to “Clear River” and that’s exactly what it is. Unless there has been a recent heavy rain, it is common to see fish such as large red snappers, and other river residents simply because it’s so easy to see the bottom. The river water has been carving into the volcanic rock foundation for millions of years. This has created a beauty that cannot accurately be described in detail. There are various types of fungus, moss, orchids and animals covering absolutely everything from the trees to the rocks. Life is literally everywhere.

Getting to Rio Claro by foot, along the “Beach Hike” is recommended for our energetic visitors but this activity can also be experienced by those who prefer more relaxing and less walking. We are happy to arrange boat transportation, snacks and lunches for your day in paradise.

There are other kayaking options offered in the village center but before describing why I would not recommend them, let’s describe the setting. The beach directly in front of the village of Drake Bay is called Playa Colorado. It is a large beach which, along with other beaches, makes up a small bay. This small bay has easy road access along its entire coastline. The small bay opens up into a much larger bay- the body of water which was named after Sir Francis Drake.

Beyond the small bay, there are numerous beaches, but the crashing waves often discourage kayakers from attempting to land on them. Thus, sea-kayaking from Drake Bay village usually involves struggling to round the first point, realizing you can’t land anywhere, and then turning back. The small bay in front of Drake village does include a river called the Rio Agujitas, but kayakers can only travel upstream for about 15 minutes before they are turned around due to shallow water.
It is my opinion that kayaks are only fun when they are useful as transportation. If there is no destination in mind, then why kayak? Thus, I wouldn’t give high praise to daytime kayaking tours found in the village center.

At night however, this changes. Night time kayaking from the village center is absolutely recommended provided that the conditions are good for experiencing bioluminescence. You can read about this magical experience on our biolumencence page.