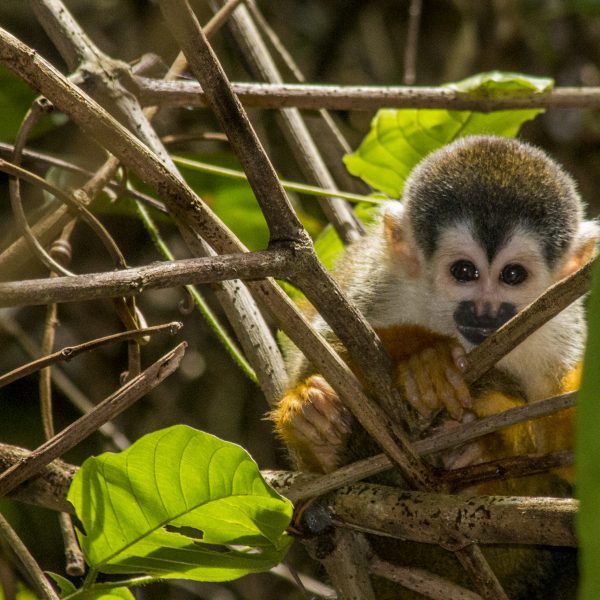 Overnight tours to Corcovado National Park can be organized to either Sirena or San Pedrillo rangers stations. Tours include park entrance fee, boat transfers, bilingual guide, meals and accommodation. Visitors stay in dormitory-style rooms or camp at San Pedrillo. Tours leave Drake Bay at 6am and return the following day at around 2pm. You will have the opportunity to explore the trails for 8 hours of hiking over the two days. Many species of wildlife can be seen on this tour including Baird's Tapir, peccary, four kinds of monkeys, Scarlet Macaws, Agoutis, Coatis, Crocodiles and more.

You should bring plenty of water, sun protection, insect repellent, comfortable covered shoes, a flashlight, toiletries and towel, bathing suit, and any medications you require. A rain jacket and dry bags for any electronics are also a good idea. You do not need to wear long pants nor sleeves.

There is a strict limit on the number of people that can visit Corcovado National Park on any given day, so we recommend reserving as soon as possible to guarantee your spot. Most tour operators will ask for 1 month in advance, but occasionally it is possible with one week notice.

When people of the Osa Peninsula talk of overnight tours in Corcovado, it is commonly assumed that they are speaking of staying at the Sirena Ranger Station portion of the park. The San Pedrillo Ranger Station is the only other ranger station that also possesses overnight capabilities but it is much less known and it has never been as comfortable as the now newly built Sirena Ranger Station.

There are very reasonable people that choose to accept the slightly less comfortable conditions of the San Pedrillo Station over the experience found in the Sirena Ranger Station. It has many benefits over Sirena when it comes to experiencing the jungle in its purest form, which you can read about in the San Pedrillo section of the site.

Overnight tours in the Sirena Ranger Station have always been very popular and there are 3 ways that tour operators generally structure the adventure:

The greatest traffic of Sirena overnight visitors come from Puerto Jimenez, which is located on the southeastern tip of the Osa Peninsula. Guides originally hiked people from La Leona Ranger Station to Sirena for dining, sleeping, breakfasting and then they returned to La Leona. Puerto Jimenez produced lots of business using this model and within a couple of years the traffic on the trails of La Leona caused many of the animals to jump ship, creating many disappointed visitors. Nowadays, the Puerto Jimenez tour guides generally begin at La Leona Ranger Station and hike to the Sirena Ranger Station where people dine, sleep, breakfast and then they end the tour with the walk to Los Patos Rangers Station. This is nice because it allows guests to experience 3 of the 4 major ranger stations, with varying elevations and ecosystems.

My problems with this are:

2) The Reverse Option
This tour starts at Los Patos Rangers Station and the group treks to Sirena Ranger Station where people dine, sleep, breakfast and then conclude the tour walking to La Leona Ranger Station.

I think that this is better than the first option because it is easier to walk down from Los Patos Ranger Station than up to it.

The 3rd option of doing an overnight tour to Sirena Rangers Station is to do the adventure from Drake Bay. Here, guides take visitors directly to Sirena by boat. This experience usually begins with a hike of 2-3 hours through one of Sirena’s 5 trail loops. The guests then sign in at the station and relax before lunch. After lunch is an afternoon hike which is completed by 4pm. Dinner is served at 5:30 and guests are encouraged to sleep early.

The next morning will start with a 3am wake up call and breakfast at 3:30. The morning hike begins at early in order to experience the jungle as it awakes. After the morning hike ends, guests will eat lunch, gather their things and meet up for the return boat to Drake Bay.

The positives of overnight at the Sirena Ranger Station from Drake Bay are as follows: