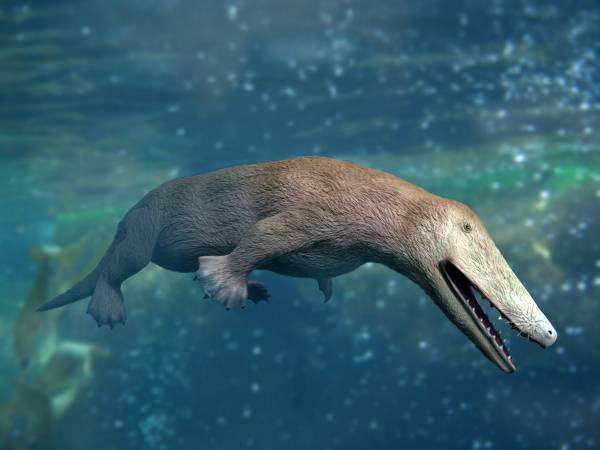 Around 55 million years ago, in the region we now call Pakistan, there lived an deer-like creature about the size of a house cat. At this time, the globe was entirely covered with tropical rainforest. Even in Antarctica. This little guy, belonged to a genus of mammals called Diacodexis. He had a long tail, and the beginnings of a hoof on his toes. He hung about munching on plants, in the company of early horses, tapirs, and prehistoric ducks. Probably being bothered by small wolf-like predators and crocodiles.

This seemingly inconsequential creature was one of the first of the even-toed ungulates. A group of animals which includes cows, deer, sheep, goats and hippos. Little did he know, he was eventually to evolve into the largest animal to ever live on earth.

What are the closest living relatives of Whales & Dolphins? And how do we know?

All Whales and Dolphins are a member of the Even-toed Ungulates or Artiodactyla. The groups closest living relatives are Hippos, sharing an ancestor approximately 47 million years ago. Once upon time, it was thought that Whales and Dolphins were closely related to extinct land-dwelling carnivores. Mainly based on the structure of their teeth.

However, we now know that they are more closely related to animals like deer and goats. In the late 1990’s DNA studies were performed that showed surprising similarities between these animals. Then, in 2001 a stunning fossil discovery gave us even more proof. 2 known species of cetacean ancestor (Pakecetus and Protocetus) were discovered to have the same structure of ankle bone as the even-toed ungulates. A unique characteristic, which placed them firmly within the group.

What does the timeline of Whale and Dolphin evolution look like?

Of course, the evolution of whales and dolphins (and indeed all life) is not a straight line. It is easier to think about as a many-branched tree or and interconnected network of rivers and streams. Some ancestors of modern whales and dolphins would have lived at the same time as each other, and likely interbred between species. As many dolphins continue to do today.

Taking a look at this info-graphic, we can see the main species and groups of species that we know about, and the ranges of time during which they lived. You can click on the images to find out more about individual species too. 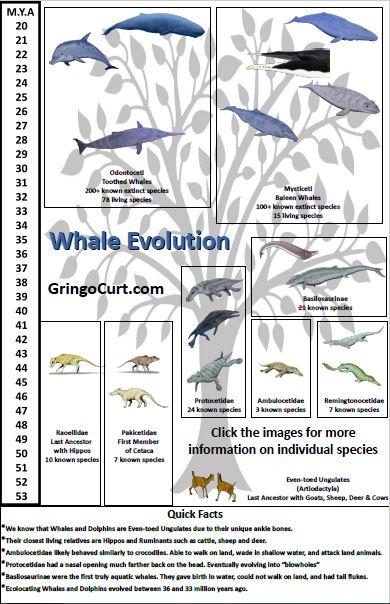 What are the main features of Whales & Dolphins and when did they evolve?

One of the first interesting adaptations to have evolved in Cetacean ancestors was a thickened piece of bone with the ear. This characteristic helps whales and dolphins to hear underwater, and it was thought to be unique to fully-aquatic cetaceans.

Over time however, fossils of a little hoofed animal called Indohyus began popping up in India and they were discovered to have the same adaptation. This tiny animal lived between 53 million and 41 million years ago and was thought to wade around in shallow waters, looking for food.

Another interesting adaptation crops up around 47 million years ago. Ambulocetus (which means walking whale) had eyes positioned on the top of it’s head. This suggested that they behaved like crocodiles, wading in shallow waters with their eyes peeking above the water, ready to pounce on land animals.

Additionally, it possessed very large paddle-like feet and would have swum around by flexing it’s spine and using it’s feet to propel itself. A movement that could be described as half-way between a doggy paddle and the more graceful movements of modern cetaceans. In later species, the pelvis would become less and less connected to the spine, allowing for even more flexibility in the water.

Protocetus, who lived between 47 and 37 million years ago also had adapted a nasal opening that was much father back on it’s head. A characteristic that would eventually evolve into the classic blowhole. Fossil evidence suggests that these animals would have spent much of their time in the water, but could come up onto land to mate and give birth. Similar to the lifestyle of modern seals.

Approximately 40 million years ago a new group of cetacean appeared which did not, and indeed could not come onto land. Basilosaurus could grow up to 17 meters long and had an almost snake-like body. They had very tiny back “legs” which were essentially useless as they did not attach to the rest of the skeleton. Their front “legs” were now completely encased in a flipper and they may also have had tail flukes. They are seen as the first truly aquatic cetaceans. They even gave birth in the water, with the babies emerging tail first, so as not to drown.

The last major split of whales and dolphins was between the modern groups of toothed whales and baleen whales. This huge difference in feeding apparatus was thought to have occurred between 33 and 36 million years ago. Also at this time, the ability to use echolocation had begun among toothed whales and dolphins. It could be that this echo-locating adaptation evolved as a distinct advantage for dolphins and toothed whales that hunt individual prey. As opposed to Baleen Whales, who do not have this ability and catch huge mouthfuls of small prey at once.

What is the physical evidence of Whale and Dolphin Evolution, and where was it found?

Take a look at this interactive map, which shows a small selection of fossil finds of the most ancient whale and dolphin ancestors. As you can see, the first cetaceans and cetacean ancestors were found in India and Pakistan. By about 40 million years ago however, cetaceans such as Basilosaurus were living all around the world.

You can click on each point to see what species it belongs to, and when the animal lived. If you would like to find out more you can visit The Paleobiology Database.

What caused the evolution of Whales and Dolphins?

This is definitely a complicated question. And the answer is: we don’t really know. What we do know is that early cetaceans were slowly adapting from a land-based diet to and ocean-based diet. This suggests that their may have been more food available in the water; or perhaps less competition for that food.

It is also possible that there were fewer predators in the water at that time, and early cetaceans were keeping themselves safe from land-based carnivores. This could have been due to the relatively recent mass extinction (the one that wiped out the dinosaurs), which left ecological niches available for mammals to fill.

Another reason that scientists have considered for the evolution and diversity of whales is based on climate and geology. Over the course of cetacean evolutionary history, the oceans and shallow seas of earth were undergoing a series of transformations. Some areas of water opening up, and others closing. This could have caused evolutionary pressure on cetaceans to adapt to their changing environments.

In conclusion, we love whales and dolphins!

No matter what the actual reason is for whales and dolphins to have evolved, we are very very happy that they did. We think that understanding a little more about how these spectacular animals came to be, gives us a deeper appreciation for how truly amazing they are.

Think about that little cat-sized deer way back at the beginning of our story. That thing is related to a blue whale. In fact, modern deer and the blue whale share an ancestor at around the same time as humans share an ancestor with squirrel monkeys. Yep, they are that close!

If you want to find out more about whale evolution, check out this fantastic video below, by one of our favorite natural history YouTubers Ben G Thomas. It was an inspiration for this massive blog project, so we encourage you to subscribe.

Don’t forget to book your Drake Bay whale and dolphin adventure! Please visit our What to Do in Drake Bay pages and contact us to reserve your spot.