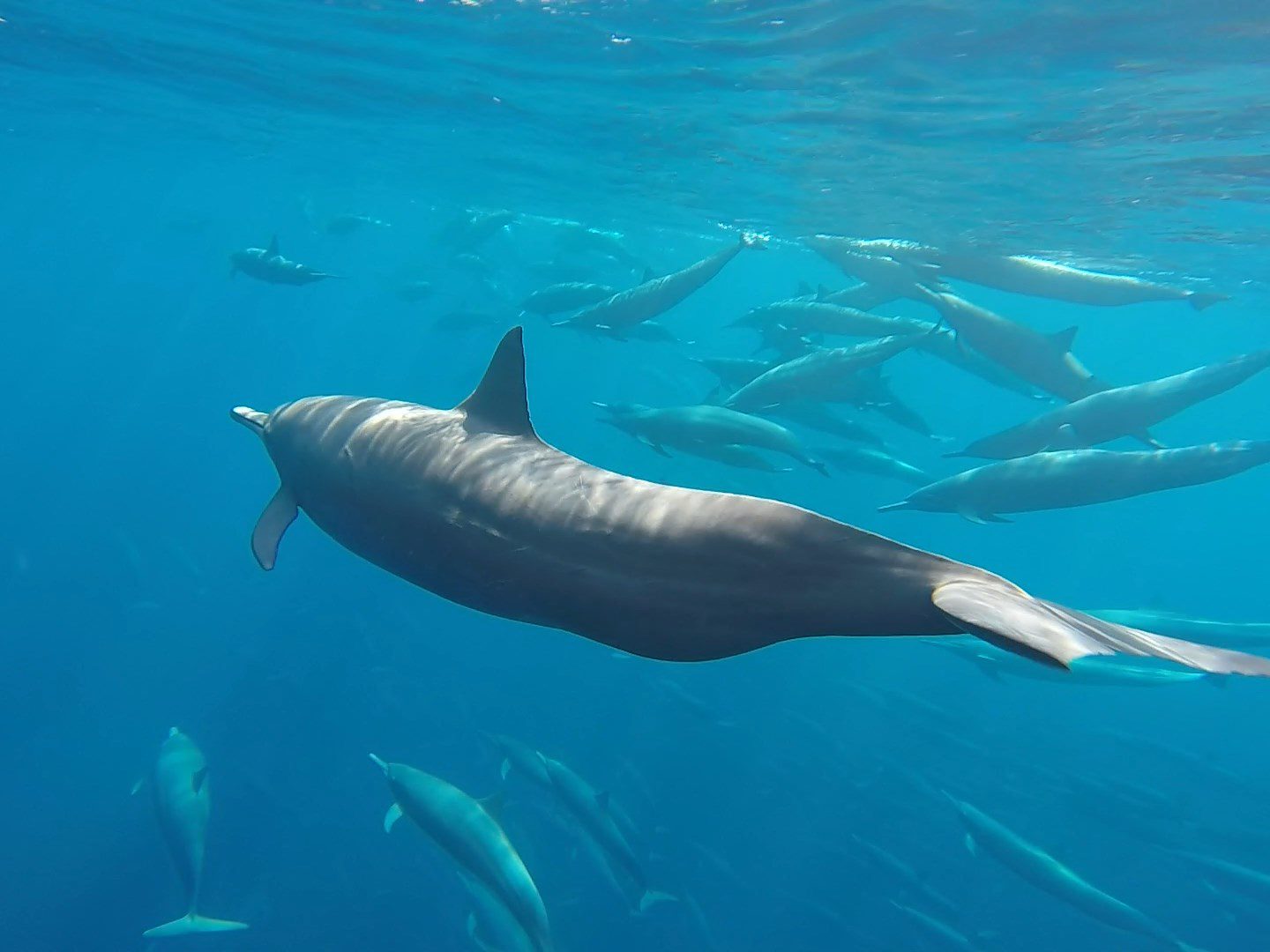 Of all the adventures that I have recorded with GOPRO, this first adventure must be rated as the luckiest. Not only because it was an experience with family, but also because of the number of species we encountered.

After the experiences of False Killer Whales and Pilot Whales swimming with us, we continued heading towards the deep and eventually about 5 miles beyond the Middle American Trench we found our captain’s primary objective, Spinner Dolphins!

As we boated through the masses of resting shearwaters they frantically flew in all directions. We saw Magnificent Frigate Birds “dog-fighting” the Boobies, with the goal of stealing their freshly caught fish. We noticed an unbelievably large shoal of sardines that had risen to the surface with the purpose of spawning. We call this a baitball or a shoal of sardines and sometimes lantern fish.

Central American Spinner Dolphins fish and feed utilizing the skills of other species. They always have giant groups of Yellow-fin Tuna following close behind. Where the spinners go, the tuna go. If the spinner’s pod breaks into smaller groups, then the tuna do as well. I speculate that the ancestors of these tuna have been fishing with the ancestors of these spinner dolphins for millions of years. I question if these tuna would even be able to catch food without this pod of dolphins to rely on.

This dynamic duos fishing tactics are incomplete without the various species of booby birds that enter the equation whenever they notice that dolphins have found a baitball. The spinner dolphin’s tactical responsibility is to keep the baitfish from returning to the depths below and to keep the shoal tightly grouped. The birds drop from the sky, diving into the shoal, disrupting the baitfish and causing them to break from the uniform movements of the group. This disruption triggers the dolphins to take advantage- darting around and gobbling up the confused fish that scatter from the attacking boobies.

Big shoals are more difficult to control, and this is where the Yellow-fin Tuna come into the strategy. They line themselves below the center of the shoal and then shoot upward (at speeds of up to 60 miles per hour in a stampede-like fashion) gobbling up sardines just before their momentum shoots them out of the water. Upon re-entry they quickly return to formation to continuing their portion of the cyclical process. The tuna’s stampeding action effectively causes the bait fish to divide into two groups. The 2 smaller shoals become more manageable and the success of the hunt increases. This sequence happens again and again until either the food supply runs out or the predators are full.

Occasionally, sharks and other marine predators join the feast, but they have no known function of enhancing the dolphin’s fishing strategy. On this particular day, we were lucky enough to also encounter Manta Rays.

My cousin’s 6 year old daughter, Ava, chose to hold my hand during this part of the adventure. She was timid to say the least, but she said that she had to force herself to be brave because she had already missed out on snorkeling with the pilots and false killers. I assured her that everything would be fine, we picked a shoal to swim up on and we entered the arena.

The view from below the water immediately startled Ava. There was so much going on that it took a moment for her to let our situation sink in. Swimming deeper into the shoal seemed to calm Ava because she realized that nothing was going to touch her. The sardines are comfortable swimming around people, but they swim at such impressive speeds that it would be impossible to touch one. After the boobies complete their impressive 60 mph (100 kph) dives, deep into the shoal, they resemble penguins swimming around frantically gobbling up as many little fish as they can get into their mouths. Their excellent eyesight means that there is no chance of them accidentally crashing into a human. We saw that dolphins were swimming down below and as Ava finally seemed to be at ease, 3 giant manta rays then swam through our shoal.

When Manta Rays enter a shoal, they take in a mouthful of fish, they somehow grind them all up and eject the scales rectally. The process appears to be almost instantaneous, as speckles of shiny scales seem to pour from their anus during consumption while they continue to dart through the shoal. It looks like fairy dust. Manta Rays can be up to 7 meters wide and Ava had never imagined experiencing something so big and so close. At that point, she had used up her bravery and we promptly hopped back into the boat. Although Manta Rays are not dangerous to humans in the least, I can understand a certain level of nervousness, even as an adult, let alone as a 6 year old child. She was proud of herself for getting in and couldn’t stop talking about the giant mantas throughout the rest of the family visit.

The Central American Spinner Dolphins usually reside within a hundred square mile vicinity off the coast of Drake Bay. They are essentially one mega-pod, that is known as the largest of group of resident dolphins on earth. They total 10,000 strong and are often broken into smaller groups of 2-3 thousand in the search for rising shoals. Few that visit Costa Rica know of their existence, yet you’ll see footage of them in some of the most popular oceanic nature documentaries, namely; “Blue Planet 1 & 2” and “Oceans”. The captain that we most commonly use has lead group trips for BBC, Disney, and for two weeks, hosted Paul Watson from the “Sea Shepherd” organization. Spoiler alert, BBC will again be showing more footage of our spinners when it debuts “Blue Planet 3” coming soon.

The offshore experience described in this and 2 previous blogs, is an 8 hour adventure. It sounds like a long time, but we have never had someone that felt like they were finished playing with spinners. I’ve enjoyed this experience more times than I can count and even I get frustrated when the clock tells me that it’s time to start heading back. I normally try to raise spirits by reminding everyone that we have lots of ocean to explore while en route for land. Who knows what we still have waiting ahead?

On this adventure, we had little time to stop on the way back but we did slow down for a few sea turtles and a pod of Pantropical Spotted Dolphins. The family members that came along for this boat ride never again questioned why I moved to Drake Bay.

If you would like us to schedule your Drake Bay pelagic adventure, please visit our What to Do in Drake Bay pages and contact us.