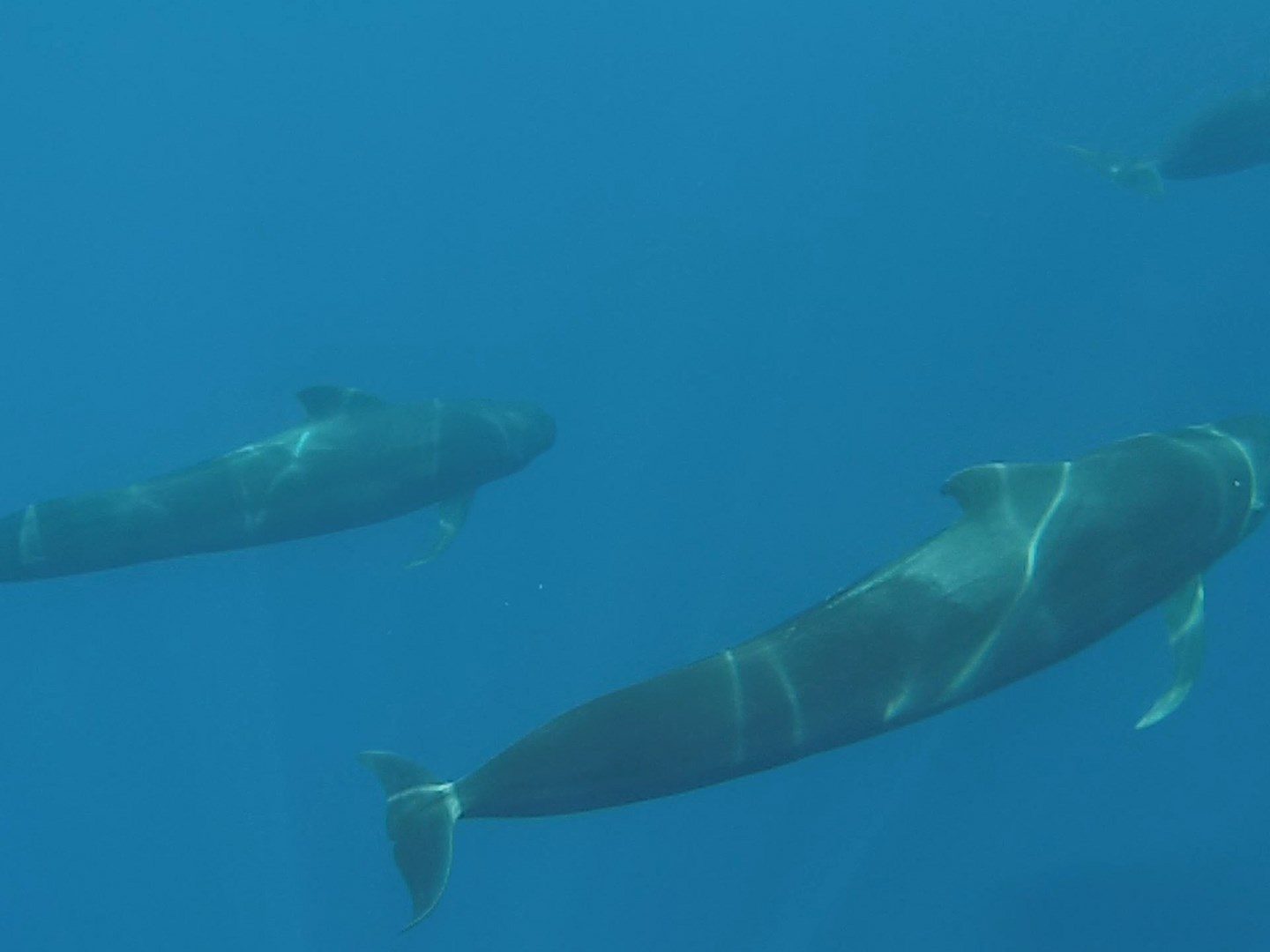 In our previous blog, we were in route to the Middle American Trench when we experienced false killer whales. Needless to say, our offshore adventure started well.

We were heading towards the deep for only about 15-20 minutes more, when approximately 30 large dorsal fins were spotted way off in the distance. As they quickly came closer, we recognized how large the group actually was and, before we knew it, they were all around us. 100+ Short-finned Pilot Whales.

When watching the attached video, understand that I was swimming as fast as I could possibly swim. Yet you’ll notice how little effort the Pilot Whales seem to use. Adult Pilot Whales are 7 meters long, have bulging muscles, and giant teeth, evolved for the purpose of ripping flesh apart.

I like to experience the oceans surrounding Drake Bay as often as possible, and I have only seen Pilot Whales on only one other occasion. Pilot Whales are residents, yet they are generally a very rare sighting because they normally stay further offshore. Practically all oceanic tours in Drake Bay experience the shallower waters, so few people have the opportunity to see deep ocean creatures.

The Middle American Trench is approximately 30 miles offshore or 15 miles beyond Cano Island. There, the depth of the ocean drops, in a cliff-like fashion, from 300 feet deep to 2,000 feet deep. We discovered the Pilot Whales in only a couple of hundred feet of water and still about 10 miles away from the trench. I remember discussing with the boat captain that something must be going on to cause them to travel so unusually close to shore.

Pilot Whales have a specialized ability to rapidly descend to great depths in high pursuit of squid. On the side, they also eat large fish such as Tuna and Mahi Mahi. The plentiful squid hunts keep Pilot Whales in deep waters so it it may be reasonable to assume that a school of large fish may have attracted them to Cano Island that day.

Like the False Killer Whales, Pilot Whales have never attacked a human in the wild. Thus, I have been told not to fear them. That seemed easier said than done, until I actually entered the water. Similarly to the False Killer Whale experience, I had an immediate feeling of calmness and safety. These enormous creatures were swimming behind me, beside me and even more of them were up ahead. I somehow never felt fear. The Pilot Whales seemed to slow down and maneuver themselves alongside me. I could see in their eyes that they were as inquisitive as I. But in this instance, they definitely had a destination in mind, and stopping to hang out with me was not among their interests. I swam for as long as I could and eventually they became shadowy shapes disappearing into the distance.

I cannot imagine the thought of people hunting these terrific animals but unfortunately it does occur. The extremely high levels of Mercury make it difficult to understand why humans go through the effort. The United Nations legal limit of Mercury is 1 microgram, per gram, per day. Pilot Whale meat is 2 micrograms per gram. Let’s try to visualize this. 350 grams is a normal dinner sized portion of meat. If a person were to observe the U.N. legal limits, then a normal portion of Pilot Whale meat could only be consumed evenly over a 100 day period. If empathy and curiosity are not enough to discontinue the act of killing these widely unstudied creatures, then shouldn’t it be enough that it’s clearly not sensible to continue eating something after science tells us that it’s poison?

Short-finned Pilot Whales are usually found in groups of 100 or more, and have complex societies. Like Killer Whales and Bonobos, Pilot Whale societies are matriarchal. The males roam from pod to pod, while the females rule over the families and never leave the pod that they were born in. Mothers nurse their young for up to 5 years. David Attenborough stated that the bond between these mothers and calves is the strongest bond of any animal species. Males have a life expectancy of 45 years while females live for around 60. Females enter menopause when they reach 40 and these elder females take on the roles of assisting less experienced mothers in raising their young.

As the Pilot Whales swam off, I thought about how lucky my family’s experience was, and that we must quickly start heading deep or I would never get a chance to show them the Spinner Dolphins.

If you would like us to schedule your Drake Bay pelagic adventure, please visit our What to Do in Drake Bay pages and contact us.